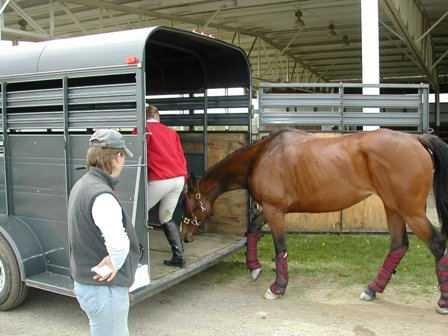 It’s so much fun when you can reach a horse and human at the same time. Recently, I was asked to come to a client’s aid. Both came away from the experience with a new understanding, a better rapport and all puffed up as a result of what they accomplished independently and then, later, together.

When you get stuck, you can either keep doing what’s not working or call for help.

The owner of a young gelding that’s only home had been her farm (he was born there) started working on trailer loading for the first time this year. She had started him under saddle but made the decision to send him to Halcyon Acres® to do some polishing and get him steady on the trails.

Things went well, until they didn’t.

I always applaud those wise enough to know when help is warranted. It’s not always something easy to admit, but doing so can transform the relationship you have with your horse almost immediately.

We spent almost an hour and a half addressing and correcting the problems the first day. Actually, the horse loaded without incident on the first several attempts, but changed his tune after we tried to lift the ramp to close him in. This wasn’t a great trailer to be working with, which complicated things a bit, but the bigger challenge was this guy’s habit of backing rapidly without being requested to do so.

Patience and understanding was an appropriate early reaction. Soon it became clear, though, that he was no longer wary, but merely having fun controlling a game he designed.

In conversation with the owner, or perhaps, more importantly, observing the horse, it became clear he had learned that flinging himself backwards at a rapid pace ended a lesson he wasn’t too keen about. So, it’s not surprising he embraced this cool tool that provided a reward.

This was a very smart horse. He also responded gleefully to attention and praise – much more so than the food bribes that had been offered in the past. Sweet by nature, this solid guy wanted to please. He just wasn’t confident enough in people to be comfortable following their lead. He needed to understand that his backing frenzy could cause harm to him or human and was not acceptable.

The training shifted from trailer loading (this wasn’t the real issue) to addressing the backing penchant.

While it’s rarely appropriate to intensify the pressure to discourage a young horse from bad behavior, in this case, it was. This guy used his bulk in an attempt to mow over the human or fling them off the lead.

We put a chain over his nose to gain some additional leverage. As expected, he didn’t like it. He quickly learned, though, that his actions were merely responded to in kind. We never applied any pressure to the lead in the trailer, but once he was out and trying to fling or knock a human off their feet, pressure was applied. The moment he offered a smidgeon of cooperation, it was released. Timing is critical. The release needs to be immediate. Also note this wasn’t a jerking on the lead action, merely some weight against it. He quickly realized his nose got comfortable the millisecond he stood still.

After that, loading was basically a non-issue. The backing off without request ended too. He’d stand for many minutes as asked then stepped off slowly, one stride at a time as pressure was applied with some fingers to his chest. He glowed and responded with delight as attention was lavished for little attempts and food bribes were eliminated from the mix.

Several days later I received an ecstatic call from the owner who, after witnessing the schooling session and listening to next step recommendations (give him a few days to process and gloat, no chain, walk on with confidence, immediately recognize tries, use attention vs. food bribes as a reward, etc.) that all went as we discussed – no, even better. Her loading challenges seemed to be history.

It’s always exciting to find eager learners who can process information easily in both horse and human form.

We’ll do another session together before we lock him up in the trailer for a short trip to the Halcyon Acres® facility, but both sessions should be uneventful. This guy really wants to be a good boy, he just didn’t understand.

Every horse is different. Understanding his concerns is the first step to resolving issues. Seeking help when you can’t is critical too. Forcing a horse on a trailer only works once. The damage you do to his psyche with such an approach will cost you big time in the future.

Instead, try to get into their head. You’ll be amazed at how much you may learn when you take the time to try to understand and respond in accommodating ways.

Unfortunately, many professional truckers or so-called seasoned trainers tend to resort to tactics that serve to reinforce a horse’s fear or dislike for the trailer. What’s more important than any tactic you use is getting a quick read on why your horse is being difficult. Usually it comes down to one of three reasons:

The most important factor in forging the path to better loading experiences is paying attention. This includes recognizing why your horse is responding the way he is, noting what he’s trying to tell you and understanding how what you’re doing is encouraging or discouraging his cooperation.

If you’re in the Western New York area, we can come out with on-sight. If not, consider our e-coaching services. Capture the scene in video, send it along and we’ll work with you providing customized ideas and suggestions through all the challenges. This month we’ve added an introductory e-coaching offer to new clients for one month of support at $65.