How’s your horse voice working for you? 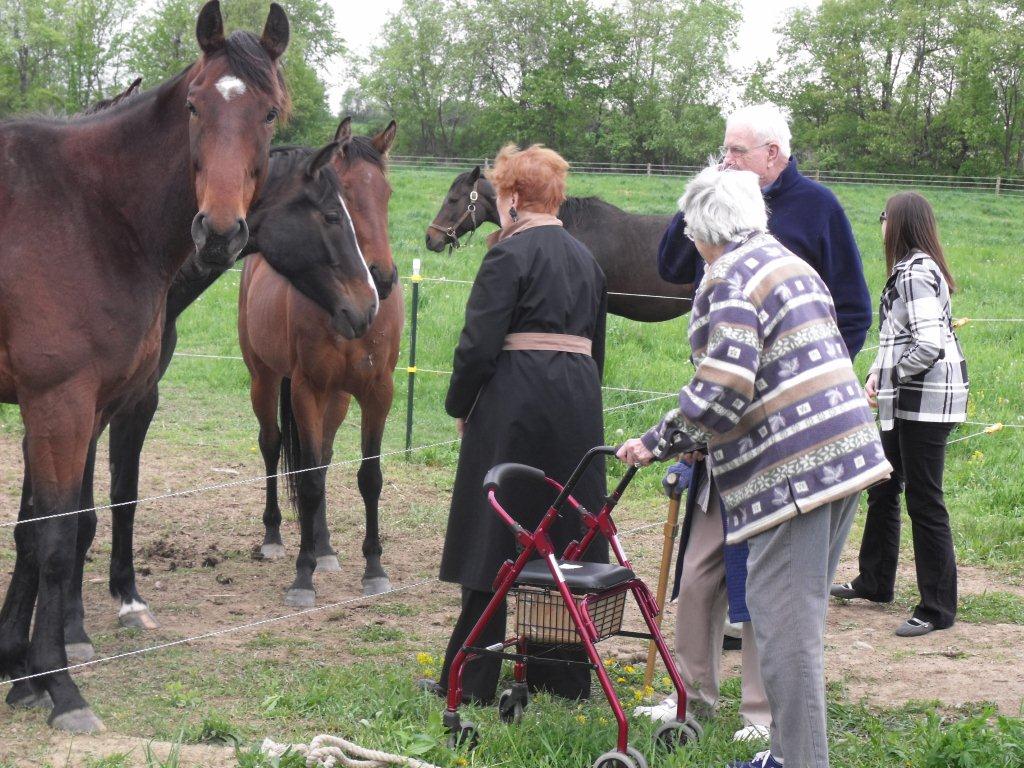 Conventional wisdom isn’t always right. For decades I’ve heard (and read) from a good number of equine professionals (along with the studies they cite) that the human voice is a poor choice for a training tool. The argument is horses can’t easily decipher our words. Maybe reciting Shakespeare isn’t going to lead to mass absorption, but most horses can understand a word or few at a time used consistently.

A horse with a name

We nickname every client horse that comes into Halcyon Acres®. The reasons are many, but the short answer is many don’t come in with names and the ones that do tend to have long, convoluted registered monikers that are too hard for me to remember or say quickly, so it’s doubtful the horse minds a shorter and easier identity.  The important result is every horse at the facility comes to know his name.

Today, I was struck by how critical such a simple practice can be in potentially dangerous situations. Three older, bigger and more spirited horses in for conditioning training managed to open the gate separating them from a herd of mostly three-year-olds in for starting under saddle work. This could have gotten ugly, quickly.

We’re pretty careful about how we select turn-out groupings. These were two gangs that didn’t belong together for a lot of reasons, not the least of which being the likely resulting considerable vet bills. Fortunately, the farm horses were being fed in close proximity when this occurred, so the mixed herds didn’t have time to mingle for long.

As luck would have it (sometimes you make your own luck) the three-year-olds were accustomed to a routine where they were released into a long chute with a temporary gate at the end that led back toward the barn at evening feeding time. The older horses were not. A funny thing happened next.

Just as the screaming, striking and kicking was about to get underway, I called the most aggressive three-year-old filly. Hearing her nickname, she jerked her head around to see me at the gate. I hollered ‘come on’ (that’s the dinner bell) and she started walking over. Getting her out of the fray reduced the likelihood of all-out war (predicting the behavior of certain horses helps in such cases).

Once ‘kick ‘em ‘till they gush’ was close enough to grab and send down the chute, I called the gelding that guides the young herd to the designated paddock and back to the barn. The ‘meet and greet’ was just about to get bloody, but this good kid (he’s classic ADD much of the time, so you never know) turned his focus immediately to the call-out of his name. Once the other two pasture-mates saw his lead, they trotted off behind him through the gate and toward the barn.

Since the older horses were used to waiting at the gate to be led in one at a time, it didn’t occur to them to try to shoot through.

In a matter of about two minutes, some simple voice cues segregated the horses and averted a potential crisis. Body language certainly wouldn’t have worked here as whole focus was on the war drums and choosing a sparring partner. Would you want to be the human putting yourself between these hoofs with visual cues? Food rewards wouldn’t have allowed smart culling and would have probably escalated the situation as aggressors beat off others for first dibs. Think discipline or fear would be an effective motivator here – yea, right.

Simply having a crew of horses who were used to being addressed by name did the trick. These were horses that trucked in during the month of December, so this didn’t require years of conditioning. Merely making it a daily practice to greet and instruct horses by name had each acknowledging that designation in less than two weeks.

Can you voice your opinions with your horse?

Some horses respond better than others to the voice, but most can learn what you mean if you’re consistent with the words, tones and rewards. Many use and cite food as a primary motivator for horses (it is), but I don’t. Yes, there’s always at least a handful of grain in a tub to reward farm-owned horses for going to their designated stall unfettered, but for most training activities, the voice can come to be as effective a reward as a treat. This is particularly true with horses that are pleasers. Sometimes a ‘good girl’ means more to such equines than a cookie. It also makes it a lot easier to make your response immediate and encourages your horse to be a thinker and a partner rather than a trickster for treats.

Recently, I read (scientific studies) that horses are now believed to have a wider range of hearing than dogs. Survival of wild horses has been credited, in part, with their ability to associate subtle sounds as forewarnings (such as the tone of bird chatter) of danger. It’s not such a stretch to conclude consistent voice cues can be easily understood by the horse. Often, people give horses less credit for intelligence and adaptability than they deserve. You might be amazed at how quickly your horse steps up to the challenges you offer if you’re willing to listen too. Why not explore how well your voice can work for you as part of your strategy in ‘talking’ to your horse?