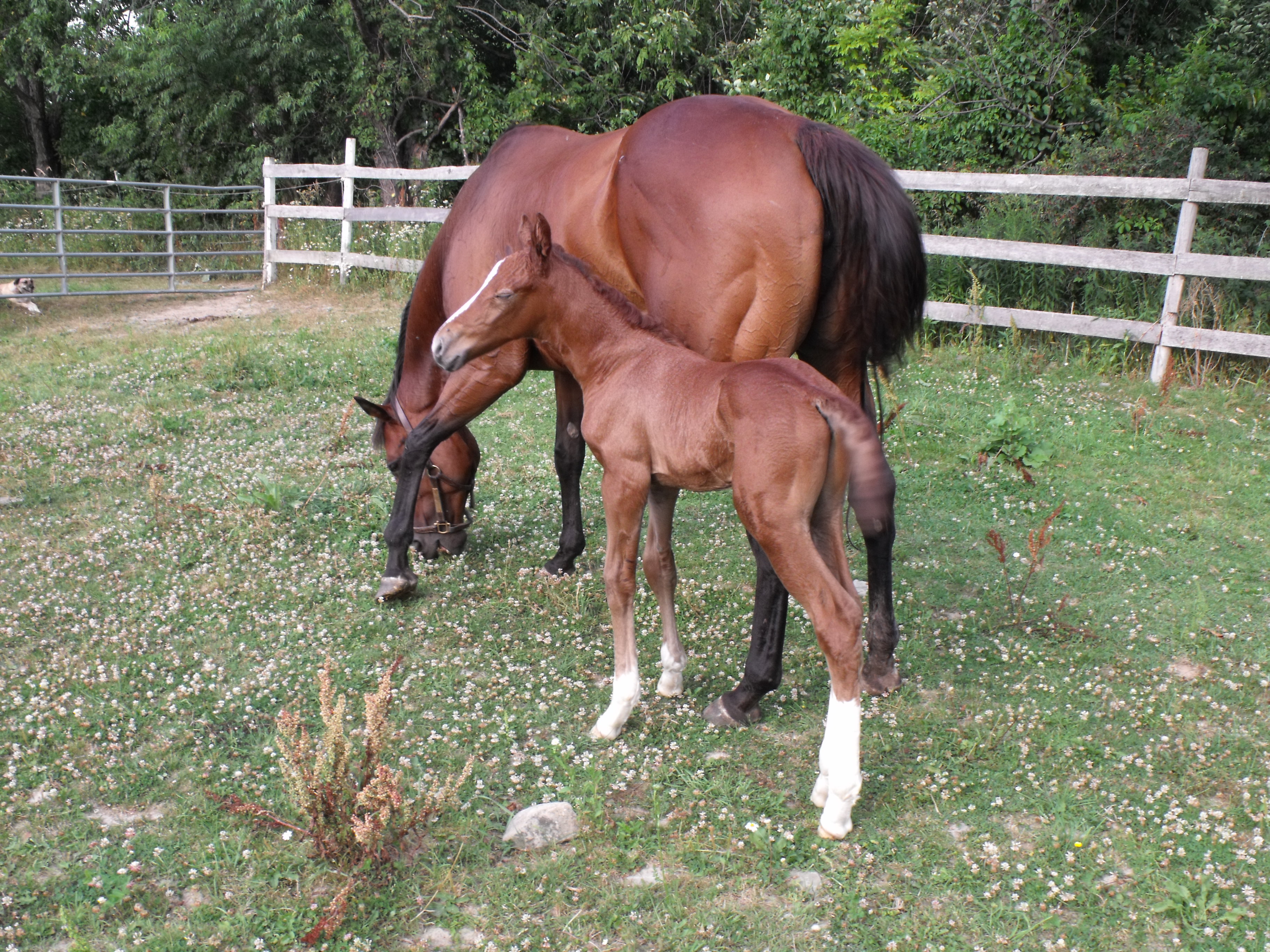 I hate hospitals. A good chunk my day a couple of weeks ago was spent dealing with an unexpected event that landed me in one. The morning started in the wee hours with the birth of a so far seemingly healthy foal at Halcyon Acres®, but admiring and bonding with this colt (four symmetrically stockings and a lovely blaze – sadly, it looks like this flashy chestnut may turn gray as he’s already a bit roan) would have to wait.

For the two hours immediately following the incident, I waited to hear back from my doc concerning her recommendation on an ER with a plastic surgeon as I worked to stem the bleeding, showed a client horse to a potential taker, gathered a couple of horses that jumped the fence as they watched me dally with the visitors well past their lunch hour (those Irish Draught Sport Horses are expressive critters in so many ways) and tried to recalculate my day. Actually, I chuckled at Clover and Shaquille’s guile– they jumped out of the nine acres they were in to get into the fenced area I was in and insisted on joining the powwow with the ultimate takers of this client filly. As they ran down the hill and planted themselves in front of me, it was obvious what they thought of my negligence (fortunately the human guests had a sense of humor). I understood their frustration – I was living it too as my planned day unraveled – fortunately the fix was easy for the equines as I simply opened the gate and they threaded into their designated stalls unfettered.

Horses thrive on routine and get unsettled when humans don’t honor their plans. They’re not so different from us in this respect. Who among us gets giddy when someone or something throws a wrench in our day’s plans? Funny, I debated skipping lunch with the farm herd as I spent an hour trying to get back my senses and figure out how to modify the day’s plans to make it work. Maybe my two smart, expressive athletes picked up on this energy and decided they would have a say. Who knows? Still, as much as it hurt to do so, their impudence put a smile on my face. Actually, I don’t even think that’s a fair assessment of their intent – they just wanted to be heard and figured out how to make it so.

Since I hadn’t heard back from my doc, I decided to keep a phone interview appointment for a radio show. I discovered if I lay on my back on the couch in the office, I could talk without saliva pouring through the hole in my lower lip. We had fun talking about horses – and how differently each processes information and responds to human personalities.

Ultimately, I opted out on my doc’s recommendation for a hospital, realizing the I’d probably be waiting many hours as gunshot wound victims moved ahead of me in queue. That, coupled with the associated harrowing trip back to my car and the realization that the specialists earmarked for my case would likely be off the clock, led me to choose a closer hospital. Stopped by my vet’s house to get her opinion on the severity of the wound and the wisdom of choosing a closer hospital to stitch me up before finalizing plans.

Difficult horses are often the most accommodating when you’re hurt

It’s funny how horses respond to the unexpected. As is usually the case, I found the horses picked up on my angst (and, of course, responded to the change in their schedule) but the ones with a tendency to be difficult at times were kind, concerned and accommodating stars. It’s amazing how any time I’ve been sick or hurt, the ‘problem’ client horses are the first to pick up on it and alter their behavior to take care of me.

Crooked (the names I’d choose for her now are less polite), however, is another story. There’s no telling where this came from (certainly not her mom, herd mates or me), but she’s vicious. In the last couple of weeks she’s decided the only good use for her teeth and feet are as weapons – and she recently added her neck to the list. A healthier state has produced unanticipated behavior like I’ve never seen in a foal. Of course, we’re known for effectively reaching and guiding such client cases with older horses, but I’m scratching my head about this anger and violence so uncharacteristic of a young foal. Time will tell if this is behavior that can be addressed or a product of a birthing challenge that would have prompted her mother to mercifully leave her for dead in the wild. Sometimes we humans go to extremes to save a horse that might not be equipped to deal with life.

I’m now done eating my meals through a straw. The loose teeth will tighten. The swelling will subside. The gash on Crooked’s neck caused by the teeth that went through my lower lip with enough force to pierce her skin has healed. Our relationship is strained. So, I’m giving her 30 days of virtually no contact to see if she grows out of this hostile persona and learns through watching other horses relish attention that people can be friend. Her nurturing filly friend is gone and now mom has stepped up to keep track of her. That might be a good thing. Time will tell.