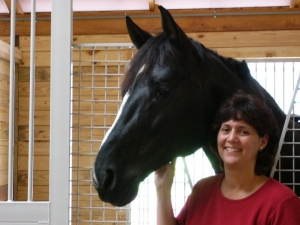 Stacey’s story is an incredible one. She founded Equilite and created Sore No More Liniment® (voted product of the year two times by The Horse Journal) before the notion of holistic care for horses was being discussed. She faced significant manufacturing challenges as she engaged producers of people products (there were no such equine manufacturers at the time). This quest included providing a comprehensive education to vendors along the way on how to create and package something suitable for horses. Today, she works as a consultant for Arenus, the company that bought Equilite, while serving as co-publisher of The Holistic Horse™ Magazine. Here’s some of what she had to say in the Inventing Your Horse Career series:

About handling change: “I was exposed to a statement many years ago that always pops up in the back of my mind, and it’s ‘How do you eat a bear; one bite at a time’ – don’t look at the overall picture of what you’re actually going to be facing. Break it down, compartmentalize it so that you’re taking one foot in front of the other, step by step, and that makes any kind of major change a lot less scary.”

New beginnings: “I think all of the different jobs I’ve had have been a progression of jobs, they’ve been stepping stones. I started out with a degree in graphic design from the University of Michigan many years ago and that led me down the path of a design studio in New York City. So, it afforded me the ability to express my creativity through those channels. But in learning to run a business and learn how to deal with sales and meet and greet people from a customer service perspective, it gave me a much broader scope on what it’s really like to run a business. It took my past just the myopic perspective of designing and creating and tackling specific projects. . . . So in hindsight, all of these smaller things that I had accomplished under a different roof, under the design roof, ended up being very valuable experiences as I needed them when I was creating other paths along the way.”

On motivation: “The primary reason I ever ended up developing products was really to service the needs of the animals. I was finding that they had certain needs in working with the different vets at the racetracks back in the late 80s. There were holes in the products that were available in the marketplace at the time. And they challenged me, they said, ‘You’re not a vet. You cannot practice acupuncture. Eight percent of Chinese medicine is really the herbs. We don’t have time to study the herbs, so put yourself in school.’ And I said, ‘Sure, why not? I’ll try it.’ And the light bulb went off as soon as I hit the class, because I realized it makes so much sense. Horses are herbivores. They’re meant to be eating plants. I realized that they’re subject to a lot of the fast food regimes and high-paced lifestyles that we as people have become accustomed to. So, I wanted to bring back some normalcy to their domestication. So the product started evolving through the studies, and the communications with the vets, and what the animals were actually seeking for to rebalance themselves. If you asked me twenty years ago if I was ever going to be involved in manufacturing, I probably would have looked at you cross-eyed. It wasn’t the original intent at all.”