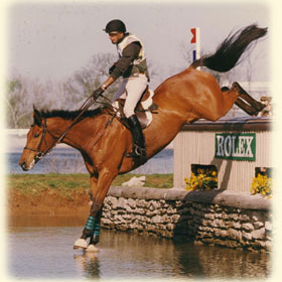 “One of the 50 most influential horsemen of the Twentieth Century …”
(The Chronicle of the Horse, 2000).

Denny is the only rider to have ever won both a gold medal in eventing and a Tevis buckle in endurance.

Denny Emerson, eventer, trainer, coach, author, leader, activist, has been a significant, influential force in the equestrian community for a half-century. Beginning with his first competition, the Stoneleigh Prospect Hill School Gymkhana, at the age of 12, Denny has forged a career with horses which culminated in his receiving the USEA’s Wofford Cup for lifetime service to eventing, the American Riding Instructor Certification Program (ARICP) Lifetime Achievement Award, and induction in 2006 into the USEA Hall of Fame. He’s also held leadership positions in such organizations as the USEA (twice president), the USET (vice-president of Eventing for seven years), the USEF (on the Executive Committee), and Chairman of the Breeder’s Committee of the AHSA.

In 1972, Denny won the USCTA’s “Rider of the Year” award. Two years later, riding Victor Dakin, Denny rode a clean cross country round at the Burghley, England World Championship Three Day Event, to secure a team gold medal for the USET. Victor Dakin proved himself a formidable force when, in another two years, he helped Denny become reserve rider for the USET at the Bromont, Olympics, and a few months after that, he and Denny won the 1976 National Three Day Event held at Radnor.

In 1979, Denny won the US National Three Day Event at Chesterland, this time riding York, who also captured the title of 1979 USEA “Horse of the Year.” Three years later, Denny was the Reserve Champion at the US National Three Day Event, riding Farnley Rob Roy. In 1992, riding the Thoroughbred stallion, Epic Win, Denny won the Bromont CCI**. Then in 1999, at the age of 58, Denny rode Speed Axcel to a clear round at the Groton House advanced event, his last advanced event.

In addition to his eventing career, Denny has been involved in numerous other horse sports during his 56 years of competing. He rode in his first one hundred mile trail ride at GMHA in 1956. Forty-eight years later, in 2004, Denny won a Tevis Cup buckle in endurance, for completing the 50th Anniversary of the Western States Trail Ride, the most famous and arduous 100 mile endurance race in the world.

Denny is a 1963 graduate of Dartmouth College, and he and his wife, May, have two sons, Rett and Jamie.

Denny recently completed his first book, How Good Riders Get Good: Daily Choices That Lead to Success in Any Equestrian Sport

, and achieved another dream that had been on his mind for more than twenty years.