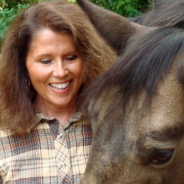 Mary Ann Simonds is an incredible woman who managed to merge her uncanny connection with horses with scholarly scientific pursuits long before any 4-year college or graduate studies programs offered an equine focus (she invented her degree focus just about every time she earned a new one). She’s an inspiring, delightful and internationally celebrated contributor to the Inventing Your Horse Career series who understands equine industry issues more than most. Her story is fascinating – as are her lauded accomplishments. Learn more about what she’s doing today at her website.

As a forerunner in almost everything she’s done in her horse career, it’s not surprising that Mary Ann was learning about mustangs in the wild – and studying how to best transition those culled out for a domesticated life – long before the current outcry over BML practices started. Much of her life (among many other equine advocacy activities) has included trying to help these horses and the people who adopt them. Below are excerpts from our Inventing Your Horse Career CD with Mary Ann.

“Well, forty years ago when I went off, I started actually at the University of California at Irvine, because it was a much more prestigious school and I thought, ‘Well, they’ll let me study wildlife biology there and I’ll pick horses.’ But that took me down the wrong path because the first class in the desert was a wildlife ecology class and they had us kill all the rattlesnakes. I quickly realized if you kill all the rattlesnakes, you’re not really studying the ecology of the desert. So, that made me mad. I wouldn’t sleep in the cabin with the professors and the class and vowed that I was going to sleep out with the rattlesnakes, which I did, and had them under my sleeping bag that night. That again was one of those ‘Ahas’ that I realized the next morning when I hiked up out of my bag very quietly and I hiked up to the top of the rocks and almost stepped on a rattlesnake. It jumped up and like a wheel rolled down. I was in tears, crying that there was so much misunderstanding and hate toward nature, and fear. I vowed then that I was going to live with nature and understand what is causing this fear in humans.

“I went, as a sophomore, off to the University of Wyoming and petitioned to do a double degree in range management and wildlife biology, studying wild horse ecology. This was right at the time the Wild Horse and Burro Protection Act was passed, and Wyoming was doing all the research, so it was a perfect time to be there.”

“I really, truly thought that my study and work with wild horses would preserve wild horse culture and horse culture in general back then. It has been nothing but a continual, cyclic, seasonal – I don’t want to say nightmare – might be too strong – but truly, nothing’s really changed. It’s gotten worse except for the fact that by being involved with the program for so many years, and on the National Advisory Board, and writing so many management plans based on behavioral management, that it has caused a lot of groups to grow. We had four when I started, and that was stretching it. Now we have several hundred groups. There’s a lot more public awareness. There’s a lot more affinity and I think something very deep in people that makes them want to save wild horses because we see a lot of this Lone Ranger-esque type of activity.

“To me, living out in the field and being able to study wild horses, as well as other wildlife, with no cell phones, no food, no water, no electricity, just living in the field and truly understanding the differences between one horse culture and another at a time before it was influenced a lot by humans – that was a magical time. It will never be brought back again, but it was a magical time.

“That experience is something that I’ve built a career around, trying to use what is functional, sustainable, social bonding, functional behaviors in horses.”

How can mustangs teach us about communicating with domesticated horses?

“What’s the real life of horses if they’re given a chance? What’s driving all the stress in our domestic horses, which is coming from their basic instinct to act as natural horses? Sometimes they don’t even know how to act, because they haven’t learned it, because so much of behavior is learned. In answering your question, I think understanding wild horse behavior – it’s not a breed – it’s understanding that horses were native to North America, they evolved into the modern horse over millions of years. Horses have spread and adapted, because of their ability to do social bonding so well, which has allowed them to bond with humans, and try to please us in a domestic world. It is the basis by which I think anyone involved with horses would want to really understand horse culture.

You can find some great material provided by contributors to the Inventing Your Horse Career series on the project homepage. Mary Ann is wealth of knowledge, a huge proponent of collaboration and a humble, kind and generous equine professional willing to do what she can for horses and people seeking a partnership.