Introducing a new horse to the herd 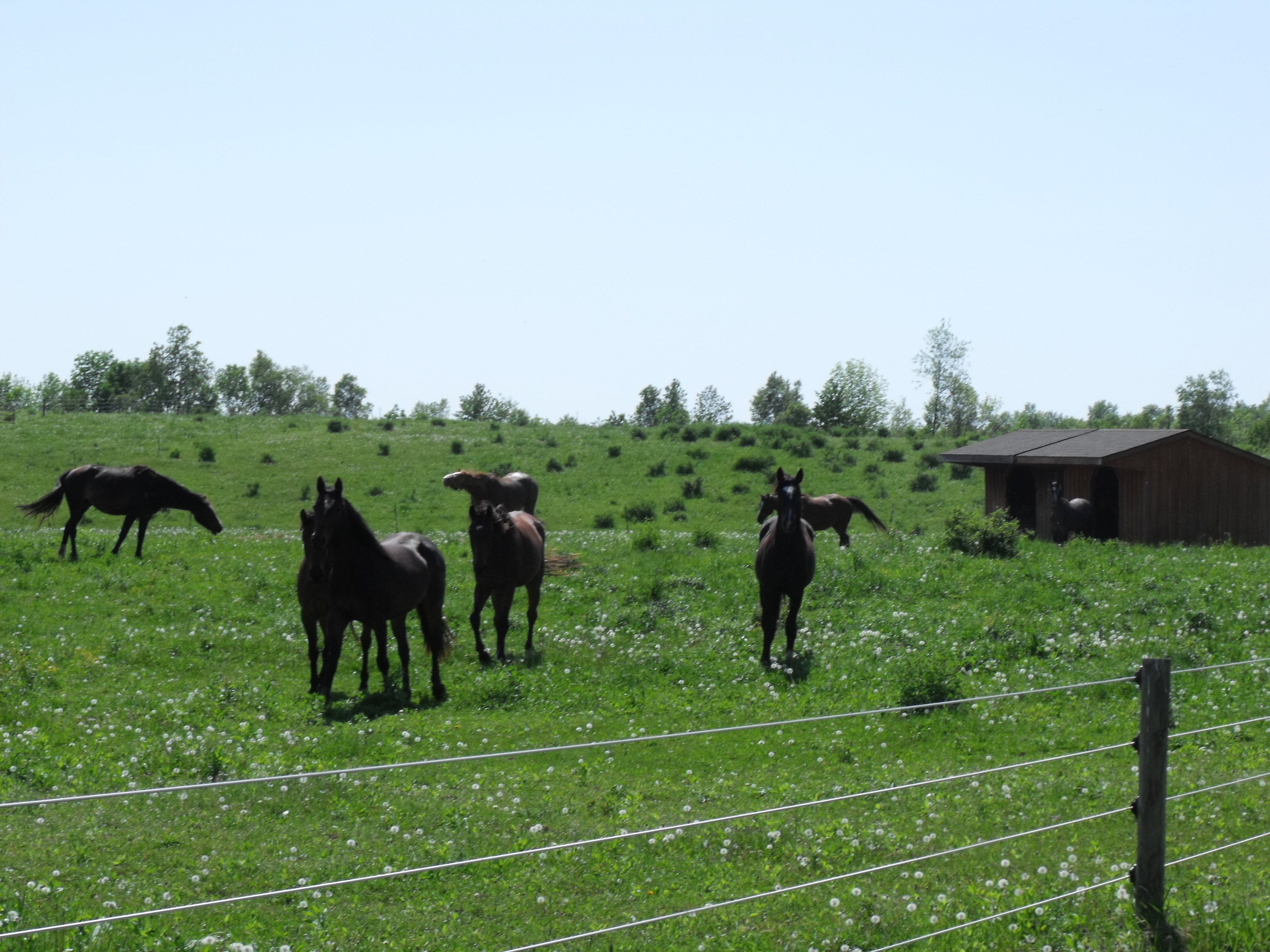 It’s always interesting to witness herd dynamics. Just when you think you have the players and likely responses figured out, horses surprise you.

Grania has been here a couple of years (since her second arrival at Halcyon Acres®) and even though she’s now a farm-owned horse for all practical purposes (her owner died and the surviving husband has put decisions regarding her care in our hands), she hasn’t joined the herd – until now.

For a long time she was a client horse here to be transitioned as a future stroke recovery therapy horse. Sometimes there’s a good reason to add a transient to the mix, but usually it’s not worth the angst for the herd – nor me – to introduce a temporary resident to the home gang.

Judie, the client, a friend, New Mexico resident and determined survivor was getting mobility back from the stroke when she succumbed to cancer. One of her last wishes was that we ensure Grania was provided with a happy home for life. As an aside, we know ultimately it’s not here (Grania loves to train and there’s just not time to give her the kind of attention she relishes).

Recently, company became important to this previously independent loner. In the past, we found companions (victims) to put her with, but she usually responded with unwarranted aggression until they retreated to an area far away from her space and path. Putting such a mare with the curious and social farm herd crew could be dangerous.

Interestingly, Grania took a liking a to a docile TB mare that came in here for starting under saddle lessons, and later, winter conditioning training. For the first time since she’s been here, Grania allowed a horse to graze alongside her and even nickered when she left and returned from riding time. Grania’s buddy trucked out this month. Suddenly, Grania developed a desire to be near the other horses on the property. After she jumped a fence then thundered toward the big pastures (I stepped out of the way as it became clear she had one thing on her mind and halting at my feet wasn’t it), it was clear her loner tendencies had changed and so must an approach to keep her happy.

Over the years I’ve met some horses (they’re rare) that don’t like other horses. You may recall Lulu from prior blog posts. She’s home now and happily segregated into her own private pasture. We tried all sorts of company arrangements and tactics to help this filly learn to appreciate equine companionship. It just wasn’t in her wiring, nor a case of prior trauma. She simply doesn’t like other horses. Porky, my best ever farm hand, was another. She’d get along fine with everyone, but preferred human companionship to horse company. The more horses that came to the property, the less she liked it. In fact, she was happiest when she was the only horse here. Grania, though, is the first I’ve ever seen go from happy loner to herd attached.

Part of the reason we delayed culling a companion from the farm herd is because it looked like Grania would be changing homes to take care of a kid through the Pony Club ranks. She liked this gal and was an ideal fit with her joy of jumping, some exquisite foundation dressage training and an ability to handily adjust to the level of the rider aboard. That fell through and it was time to make a decision about how to handle her new desire to be social.

Since we’re getting ready to start rotational grazing, it didn’t make a lot of sense to allocate an entire pasture to a single horse or pair. In fact, it would have required two (six acres) to make water delivery easy and shelter readily available with the current configuration. So we decided to take a shot at introducing her to the herd.

Preparing for a safe herd acclimation

We picked Cowboy for Grania’s initial single companion. The two shared a couple of pastures adjacent to the herd with access to the other horses over the entire fence length.  This 8 YO TB gelding is one of the most amiable in the herd, big (16.2hh) and unflappable enough not to be bothered by her possible aggressive behavior. He also didn’t seem to have any strong peer attachments. Bad decision.

The first three hours were uneventful. In fact, the pair didn’t even go through any squealing or striking rituals, but instead, merely planted their heads in the grass next to each other and grazed without much notice of each other. Of course, everyone in the herd ran over to the fence line to investigate the new scene and gathered like soldiers in formation (wish I had a picture of this one), but ultimately went back to routine.

I was working in the vegetable garden when the sound of pounding hoofs caught my attention from more than a half mile away. The sight was horrifying. Cowboy, neck out-stretched, teeth bared and hoofs chasing at 30 mph went into an attack-mode frenzy (I’ve never seen this kind of behavior from him – and he was born on the farm) aiming for the jugular. I’m not entirely clear what set him off (didn’t see the engagement moment), but suspect he was reacting to a separation from Leah. She was running the fence line with the pair. I bolted out to the pastures, opened the gate, Leah entered and Cowboy exited.

That actually worked out better than I had envisioned because Leah was my second choice. She gained alpha status in the herd (we have several with this designation) because she refused to move when the most aggressive mare in the herd (she’s so not an alpha) tried to chase her out of the run-ins or away from water. She’s a leader that’s been appointed even though she’s never shown any aggression toward others in the herd. She’s only three.

Leah was great about being kind and accepting in her requested role as Grania’s baby sitter and short-term friend for herd introductions. I had promised Leah a single day of separation, but it wound up being two because Cowboy’s continued aggressive behavior over the fence line was a concern.

After the Cowboy incident, I was anxious when the time came for herd introductions, but fortunately, it was basically a non-event. Crooked (a fearless yearling filly) was most curious about this new herd sight  (she’d been with the same crew since a couple of weeks after birth) and spent time touching noses with Grania for hours. Leah helped keep her safe (what a gem this filly is) guiding her away from herd infractions likely to result in a beating. Grania did err as she tried to command one of the run in sheds as her own (she learned that lesson quickly and exited at a gallop), but didn’t make that mistake again.

Interestingly, Judie (yes, her nickname was given to honor Grania’s former owner while she was still alive – her registered IDSH name is Halcyon’s Keepsake – karma or what?) decided to be Grania’s buddy and secluded herself from the rest of the herd to provide companionship and guidance.

Maybe it was a good thing Cowboy went into stallion attack mode. It seemed to humble this mare that was previously an unrelenting aggressor. As I picked up my head from garden activity to see what all the noise was about, even at the distance, it was clear Grania felt she was running for her life. She probably was. Teeth marks (fortunately all superficial) were apparent along her jugular. She did get in some good kicks (mostly on Cowboy’s chest – all superficial but well-aimed).

Curiously (or maybe not – this is an incredible filly) Leah jumped in as the kind companion and artful leader she is with all. While she wasn’t initially thrilled about being separated from the herd, she seemed to quickly understand she had a job to do and managed to help Grania easily transition with wise and watchful counsel. She even stepped in to put herself between Grania and Cowboy when he became threatening with body language. Leah’s only 15.1hh and dwarfed by Grania’s bulk and Cowboy’s height.

I continue to be amazed at how intuitive horses are. Whether they’re picking up signals from me or jumping in to ensure a safe and peaceful living arrangement, I don’t know, but it sure is neat to witness.