What’s all this horse talk about “respecting my space”? 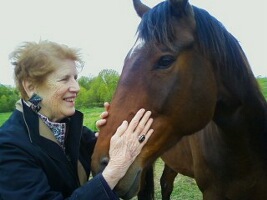 It’s troubling to see so much being put out there offering formula approaches to reach every horse. The latest mantra seems to be “respect my space” and is often used as an excuse to dominate a horse into submission. This is especially prevalent among novices, who spout the term with conviction, nod in agreement to the need, yet fail to really understand what they are doing to the horse. Sadly, they’re getting this belief from some self-proclaimed professionals. Novices are sponges when it comes to learning, and I think we need to get a better message out there to ensure future happiness – and safety – for horses and their human handlers.

Do you really want to teach a horse to learn through fear, exhaustion or pain to surrender to you? Wouldn’t it be better for both horse and human if space was shared and respect was mutual?

Sure, there’s a time and a place to send a horse off, curtail rude behavior or demand compliance, but for the truly happy partnerships, this is rare.

Smart horses with heart make the greatest competitors if allowed to chip in to the team effort (although they’re certainly not the best mounts for novice riders). Given the opportunity to contribute to the conversation and goal, these horses will outperform more able equines on heart alone. They’ll also turn into eager pleasers once introduced to a human they can respect on their terms. Sadly, the respect conviction some hold, practice and promote that encourages an “alpha” persona (another misunderstood concept) can rob these horses of their spirit as they are demanded to conform to a process that doesn’t consider their input.

Additionally, young horses in particular (now often in novice’s hands) need to be heard, understood and considered individually in training regimens. Putting rote boundaries in place to teach the horse to avoid you until called doesn’t give him a lot of confidence (in himself or you) during the learning process. Some horses are timid, frightened or leery.  Such horses usually thrive when offered a kind, helpful and patient approach “in your space.” Using formula programs that discipline him for having the courage to approach you is counterproductive if the aim is a well-adjusted horse.

Those of you who follow this blog know we had a group from an assisted living facility visiting the herd at Halcyon Acres this month. None of these horses have been programmed to “respect” an invisible perimeter around people. It’s a good thing too, because the experience for these residents would have been far less rewarding – and probably more dangerous.

Instead, these horses are all asked to follow a few simple rules (get along or you’re out of the herd; go into your proper stall without a lead when you’re brought into the barn; no biting, kicking or aggression toward humans; I decide who’s coming in first – and last; and a few other basic requests to help keep all safe and farm operations running smoothly). They’re allowed to be friendly and sociable with humans, and relish the opportunity to approach known and unknown people for a pet and a visit. Of course, each gets customized training in ground work and under saddle training and because they are offered a say in the process, they are eager to have a job to do and choose to watch for and respect requests. Consequently, they can be trusted to be smart, safe and responsive when any human comes into the mix. It’s not about dictating compliance – it’s a mutual trust and understanding that develops from two-way communications.

I have to say, I don’t get this “my space, your space” approach. Of course, there’s a lot to body language with horses and with this arsenal, you can usually put a horse just about anywhere you want. So, it’s hard for me to see why training a horse to avoid you makes any sense at all. I certainly haven’t encountered a horse (at least not yet) that shines when respect is a one-way street. For me, I’d rather encourage horses (both client and farm-owned) to join the conversation and tell me how to make the experience fun, exciting and engaging for them. If that means the herd expresses their excitement at training time and jockeys for position to be first in line, I’m OK with that. In fact, it’s rewarding to have horses that not only enjoy training, but also anticipate the joy to the point they’re competing for the attention. If all were forced to succumb to a formula approach and were “trained” to “respect my space,” I don’t imagine they’d be so eager to saddle up.  Different strokes, I guess.