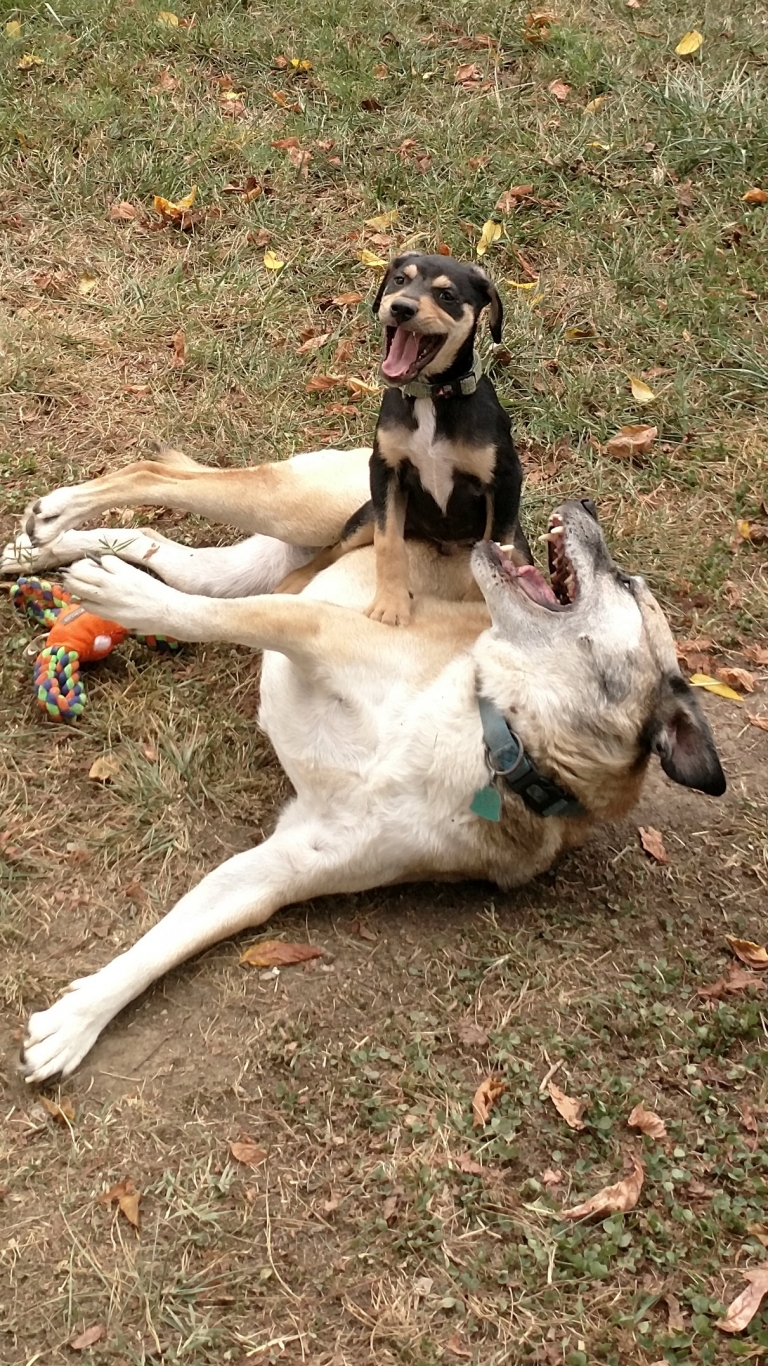 I’m not a big fan of tricks for treats. I was steadfast in my resistance to this with horses through all the “new and improved” training techniques over the decades that heralded food as a “positive training” motivator. That’s good for creating muggers and distracting the horse from what you’re trying to communicate, but not very good at creating lasting understanding with your equine pal.

I’ve never really been a big fan of food bribes with my dogs either. Due to a couple of recent events, I’m digging my heels in deeper here too.

Curiously, when I tell trainers that Morrie (my seven-month-old pup whose smarts can make him a tough one), is fixated on treats, they say “Yea!”. I say neigh. I’ve learned in working with both horses and dogs, using food as a motivator isn’t very good in the building rapport and a thinking animal department. It’s hard to get the full array of communications working when attention is singularly focused on the treat location.

Don’t misunderstand – I’m not against giving quick and ample rewards for the responses you seek. A scratch in a favorite place, “good boy,” a break with something your horse (or dog) finds great fun or a release are all great ways to offer gratitude for understanding. It’s the food lure that bothers me.

Sure, I get clicker training became the rage and redirection vs. correction is a great sign of the times, but you won’t convince me that treats represent the best way to build a communications bridge.

With horses, you lose that critical aspect of training that creates a team of two minds working together to solve problems. There are many times I’ve welcomed an equine cohort ready, able and willing to get me out of a sticky situation I’ve gotten us into.

With dogs, I’ve found you might gain a happy and groveling companion, but you don’t get a partner that enjoys having a job. Sure, domesticated dogs became so because they learned to please for food as a survival instinct, but like horses, I don’t think most people give them enough credit for having independent minds.

Gatsby was the best assistant horse trainer I ever had (and I still miss him terribly). Of course, he had spent enough time on the city streets before the dog catchers wrangled him that his skin had grown around the collar on his neck. So, he had a pretty strong independent streak and knack for finding (killing) his favorite “treats”. I realized almost immediately with him (he was always the dog obedience class “don’t do” example), the standard obedience school technique of bribing with treats was a bad idea.

Morrie’s now learned to leap for treats (not the plan) and ignore simple commands like “sit” without a visible reward. When I stopped using treats for the pre-agility training class we’re in (I pretend for the teachers he’s getting them always, as I did with Gatsby), his understanding and performance improved dramatically. He loves to train. Getting rid of the treat reward made him more excited about the activity understanding and “good boy” accomplishments.

Remi (my 11-year-old mutt), quickly transformed from the most trusted and obedient dog I had ever known to an unresponsive and aloof brat after spending time with a couple and their Vizsla playing the in park. The Vizsla would only respond to treats. Remi delighted in the daily hour of gorging herself on cheese then decided she wasn’t coming when I called without a bribe in hand. This was a dog I trusted enough to let her off leash in public places with no concern she’d return to my side immediately on request. No more.

I’ve made the argument before that horses aren’t dogs and what works for canine compliance isn’t a good standard for young horse training. I’ve since decided tricks for treats isn’t a good teaching method for any species. Just look at what’s become of the generation of kids who have grown up on the “everyone wins” philosophy.

All that said, I was delighted to watch this video Colleen Kelly shared about a clever dog who set records for understanding and performance – without food bribes.

If you have trouble viewing this video here, the direct link is: https://youtu.be/_6479QAJuz8