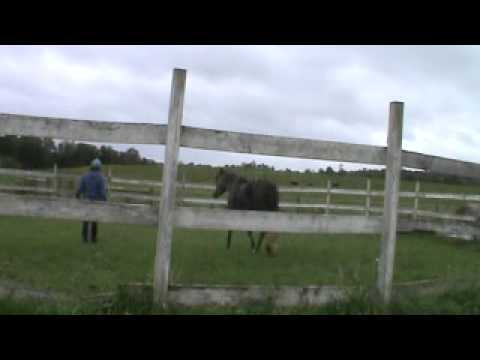 If you’ve been following this blog recently, you’ve met Clover and Carrot.

As a quick update on Carrot, the rearing issue might have been resolved today with a ‘knock it off’ response to her intimidation tactics. Time will tell, but once outside, she immediately resorted to rearing again, but relented once she realized this tactic wasn’t going to net anything but annoyance. It was a good test because there were a lot of horses in close proximity that could have occupied her full attention (usually the horses are in the barn or pastured further out when we train), yet she turned her full attention to the rider once she was discouraged from calling the shots.

When this little three-year-old half Arab filly trucked in, I thought she might rank up there with some of the most challenging Halcyon Acres’ projects – including badly started horses that already had their brains seriously scrambled with early introductions to training and required considerable time and intuition to reach. LuLu underscored this conviction as she left a path of destruction in her wake – splintering boards as she kicked at horses in adjacent paddocks, jumping out of her paddock to go beat up other horses, breaking lead ropes and lunge lines and behaving in ways that made all the residents at the farm uncomfortable.

That first day was a knock-down drag-out battle of wills where merely asked her to move forward and/or stop with body language in the roundpen netted hostile responses. Ultimately, the goal was looking for her to acknowledge me, but we didn’t quite get that far. We did manage to reach a point, though, where she allowed me to approach her as she stood quietly and politely.

The next day was a shocker (apparently she processed a lot more than she let on). I brought her to the roundpen and then set up a video camera, figuring this would be a good lesson in what’s not working. She waited at the edge of the roundpen and watched as I set up the camera. I entered the fenced area, ignoring her and proceeding to the center. She trotted right up to me and stood. This filly had spent her life dominating all the animals and humans she encountered. She had never met a match that wasn’t intimidated by her, yet didn’t return her hostility in kind. After a day to think about all this, it seems she decided she liked the idea of having a leader she could respect from kind but insistent actions.

Today’s challenge was the bridle. While she’s been a bit uncomfortable with the bit in the past, she suddenly seemed terrified to have her mouth violated. This was honest fear – you could see it in her eyes. There’s no way to know where this was coming from, but it was real. This filly’s spent a lifetime being motivated by food and it’s incredible how excited she gets about the mere sound of vittles. With this in mind, it seemed coating the bit with molasses would be an easy fix. That didn’t work. What ultimately did was simply spending a good deal of time comforting her with the bit in front of her teeth, but not in her mouth. Once she calmed down and realized this wasn’t going to hurt, she calmly and willingly accepted the bit. The rest of the lesson went great and we put her out with the big girls – where she’s no longer queen bee, but seems to appreciate the reward of company over isolation.

We haven’t had a problem with the bit since our first blow up. In fact, she now opens her mouth the moment it’s presented (this gal is pretty oral anyway). She still has some issues with the girth being tightened, but if there’s food in front of her, she’s not bothered.

She became comfortable enough about the bit that we started long lining her and had our third session today. She’s still a bit confused about the signals, but an exaggerated leading rein seemed to help her understand.  It’s kind of funny, as she seems to naturally gravitate toward an indirect rein, and her intended career is with Western tack.