Starting under saddle: horse tales from a trio of uber alpha fillies, Part 2 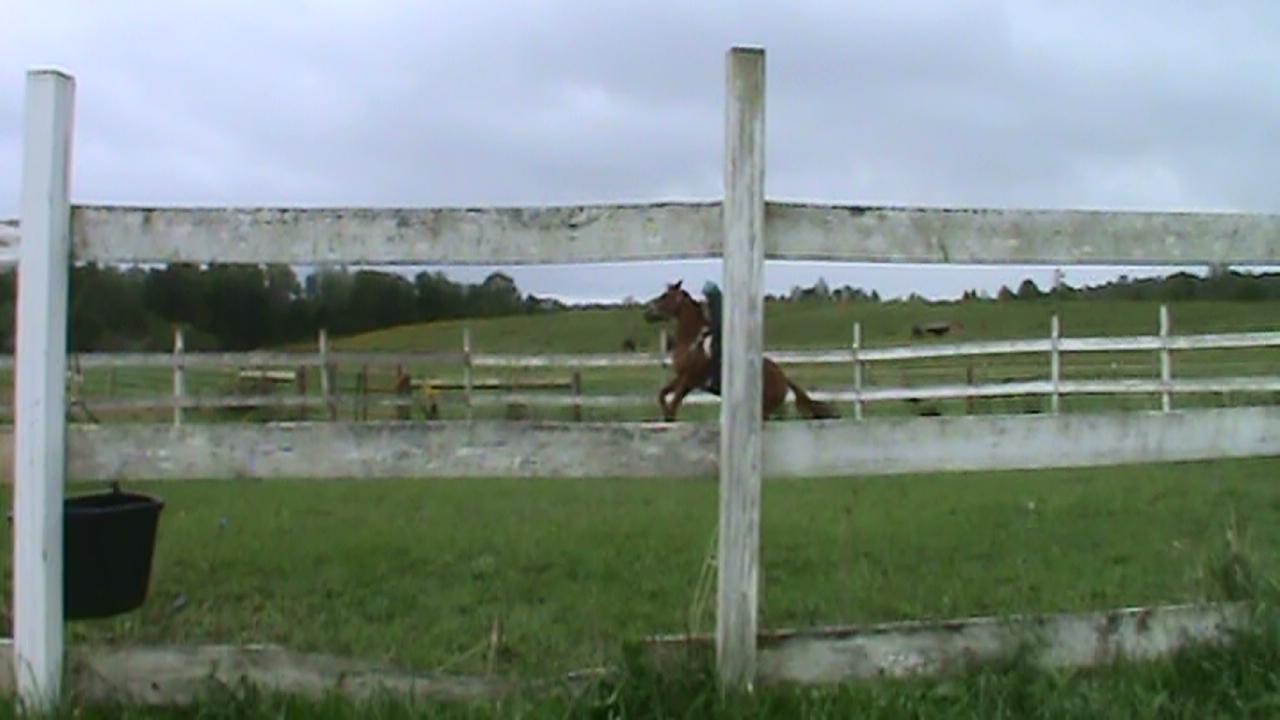 Yesterday, you all met Clover. She’s a hoot. As much as I hate to make this so public, I’ve posted her antics on YouTube because WordPress doesn’t seem to like my computer files, so I gave up last night.

This video was taken after a short stint of training on the trails where she was all full of attitude and tuning me out. Her mood didn’t change.

After I opened the roundpen gate and headed her back to the barn (fortunately, I was remiss in removing the reins from behind the saddle), she decided she wasn’t done and took off toward the back 100 or so acres. Her playtime game lasted almost an hour. That’s probably why she got so belligerent about turning home the other day. She’d seen how exciting the world was on paths beyond her former reach and wanted to see more. That’s Clover.

Carrot came in for starting under saddle training about three weeks ago. She’s a 2 YO TB filly headed for the race track. With good handling and good care, she arrived at Halcyon Acres with some basic manners and a healthy body, which helps a lot. She also came with some warnings. It’s wonderful to work with clients who are open and honest from the onset. The behavior problems revealed and trailer loading to get her out here revealed her strong alpha traits.

Alphas will make you pay

Thursday the chits were called for a mistake I made during Carrot’s last riding session. Although this filly presented some minor initial posturing moves, we found a clear, no-nonsense approach netted an eager pleaser as we started the communications and training process. So, I got complacent and stupid in how I reacted to a known alpha’s behavior. Basically, I quit when I shouldn’t have because I was convinced her behavior was due to discomfort (and it probably was – but the price I paid for backing down due to guilt for training a filly that wasn’t quite right will be weeks of undoing the damage in our rapport).

She was aloof and distracted prior to my hopping aboard on our last ride. In retrospect, the lesson should have ended without riding time. It didn’t, and after some walk and halt work, she started to rear.

Not just a hop, but a perpendicular to the ground, striking and hanging pose that was made for the movies. After prompting her to move forward properly for a few strides I hopped off. I checked her out and couldn’t find anything (it seemed like a pain response, given her prior stellar attitude) and figured a little more ground work would help. When I returned to the saddle, she went back to rearing. Since my gut was telling me this was more than an alpha tantrum designed to intimidate, I walked her off for a few strides to get a requested response and demonstrate I wasn’t concerned (I was on a number of levels and she probably knew it) and ended the session with plans to give her a couple of days off and a good going over to try and find out what might be bugging her.

Coincidence, perhaps, but two days later her hock blew up. It was hot and painful, but she traveled sound. After two days of bute and ice, the hock was normal, treatment was stopped and she was given an extra two days off.

After some quick free longing and a ground driving session where she was perfect (long lining had been a huge issue for this filly in the past, but she accepted it easily and politely this day), I hopped into the saddle. We didn’t get two steps off when she started to threaten to rear again. She’s a quick learner and this time, it clearly wasn’t about pain, but instead, manipulation. She had learned well on the day I was kicking myself for being stupid and unfair to this horse, and my associated decisions taught her that rearing put her back in charge. Of course, I now more fully understand the behavior tendencies that produced the warnings from her owner. I saw the alpha in her from day one, but was arrogant enough to figure I had reached her so effectively that she wouldn’t consider challenging me.  Dumb move.

When the going gets tough, the mature rider gets creative. It was raining and severe thunderstorms were in the forecast and on the horizon. I wasn’t wearing my invincibility cape, so decided to let her teach herself a lesson. We headed to the historic barn on the property to offer her a close encounter with low ceilings and 2 X 8 supports 12 inches apart. Smart horses think twice about ever rearing again once they spend a few seconds with their head seemingly trapped as they flop it back and forth in the space between the boards. It doesn’t hurt them, but it does create a memory that connects rearing with a very unpleasant sensation.

Habitual rearers are more dangerous to themselves and their riders than just about any other behavior trait horses may pick up. Ending this tendency before it becomes ingrained is important for the safety of all involved. The barn environs at Halcyon Acres provide a good quick cure for this penchant. Of course, I wear a helmet at all times and have good balance so can put my body where it needs to be, but also know when and how to duck. Don’t try this at home.

Well, as is the case with most strong alphas, this gal was smart. She hopped a few inches off her front legs a couple of times, but once she realized I was ready to egg her on, the idea of rearing wasn’t appealing. She was clever enough to recognize the ceilings were too low for her to do her hi-ho Silver act without bumping her head. There was some good that came out of all this, though – it was clear this filly understood aids being used for requests. Previously, I had assumed she was frustrated and confused, but was now proved wrong.

Rearing in the future will get a stern response. It will probably take the better part of a week to fix this one, but Carrot is smart and athletic enough to know not to go past perpendicular and I’m balanced enough not to flip her over. Still, working through this type of issue can be a bit harrowing. Sadly, this now has to become a battle of wills. Bummer.

I’ve learned to use the herd to teach a lesson in a day that may take me a month. A few days after Carrot trucking and had time to acclimate to the property and routine, I turned her out with a couple of our farm herd members (Clover and Cowboy) to help soften some of her detrimental alpha tendencies. After a day out with the pair (neither are aggressive, but they won’t be dominated), she transformed from a hostile and combative stance in the morning to a horse that politely waited to be last in at dinner time.  Some might call it cheating, but using other horses to help instill a lesson can save tons of time.

You need to know the players and choose carefully as you do this (or vet bills will mount and you run the risk of teaching the wrong lesson to the horse in question), but over the years, I’ve found some gems to help me resolve issues immediately. To whit, Midge is my go-to gal (tiny but tough as nails) for cocky colts. Put one out with her when she’s pregnant and she’ll rip the hormone drive right out of them in a day’s time with nary a scratch.

If you like this blog (or even if you don’t), please comment and tell your friends about it. Have a question or issues you want to see addressed? Just ask and we’ll try to answer or find a resource who can. Have ideas you’d like to see explored in a future blog post? Let us know and we’ll try to cover it. Feel free to Tweet (we have TweetMeMe set up now), share on Facebook or share with any other equine community you belong to. We can take the heat of contrary comments, and welcome them as an opportunity to learn, explore and change perspectives.